Hi guys! Hellbound is in the final stages of editing and I'm so excited for it to be released. I named it Hellbound, and honestly with the way this current year is going, is it any surprise that hell has been on my mind? This year has been a giant hellscape and I'm grateful to be able to escape into writing.
It's the final book in the original Haven series and we'll find get a chance to see Xavier's love story unfold. Though it's the final book of this series, it won't be the last book set in this world. I have a couple of novellas I have tentatively sketched out for next year, and i'll keep you posted once those firm up.
If you subscribe to my newsletter, you've already seen the cover and blurb for this book, today, I'm giving you a sneak peek of the first chapter. I'm going to put the first two books on sale closer to the release date so those who haven't read it can get all caught up. I'll also post the preorder link once it's up. If you'd like to be alerted once the preorder is live, sign up for my newsletter. It's still in the editing process, so forgive any mistakes you find. 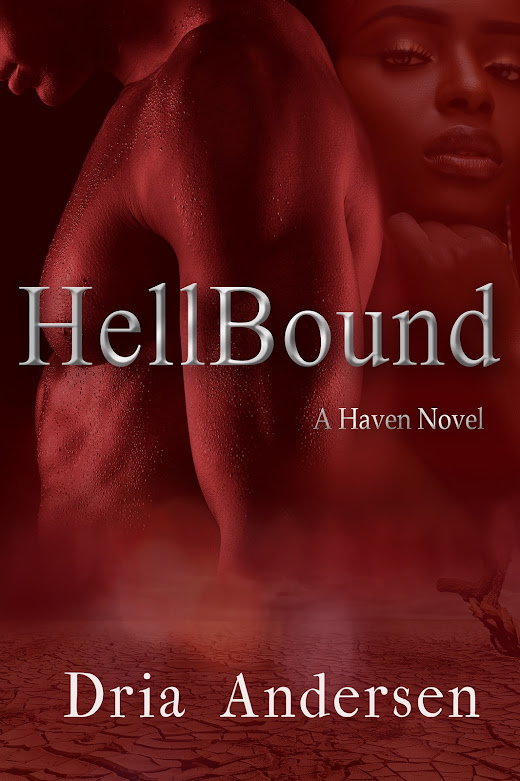 Asa’s life had never lacked adventure. Hopping from one exotic locale to another was a part of her job as a treasure hunter. She thought she’d seen everything, until she was kidnapped for the third time…no wait, maybe fourth? Just like the times before, she’d hear out her kidnappers,decide whether she’d take the job and be on her way. Except…this time it wasn’t a job awaiting her, but the man she’d been dreaming about for a year.

Xavier was head of a military force that kept demi-gods from overrunning the human population. He handled his job and any trouble facing his family with ruthless precision. During the day, he kept his head down,preventing a war that could destroy the world from breaking out. At night…at night, she was in his dreams, calling to him, tempting him.

What happens when she walks straight from his dream and into his worst nightmare? How could Xavier stop a war he feared would end the world without sacrificing the woman he loved?

Keep scrolling for a sneak peek of chapter 1!
Hellbound Excerpt...

Asa’s nose twitched at the smell of stale coffee that rose from the kitchen. She didn’t want to be here long. At least no longer than needed. The land lord had been reluctant to let her in, but she’d threatened to call the police. He only gave her a few minutes and she could tell he’d already gone through and taken some of what she was sure Herman considered ‘valuables’. She didn’t care. There were a few items of her mother’s she wanted but then the asshole’s relatives could have the rest.

She shuddered as she passed the couch where he’d spent so much of her youth. The apartment was different, but that couch…it was memory laden, and none of them good. She could still picture him there, hunkered down in the seat cushions, a beer in one hand, and the other hand free to slap her at a moment’s notice.

And though it gave her a moment’s guilt, Asa was glad Herman was dead. Her mother’s husband, she didn’t deign call him her stepfather, had died three weeks ago. Suicide, the authorities had said. Too bad he hadn’t done the world a favor and jumped off the roof prior to killing her mother. She shook her head and got back to the task at hand. He’d been awaiting trial for her mother’s death. How he’d gotten out of jail in the first place was a mystery to everyone involved in the case. It didn’t matter to her, he was dead, and she couldn’t care less about the state’s idea of justice.

She swallowed her bile as she walked into the sparse bedroom that the monster had once shared with her mother and had lived in alone up until three months ago when he’d beaten Deena to death. She wanted to cry, she wanted to rage, but instead she choked it down and walked to the small closet where some of her mother’s clothes still hung.

She’d tried over the past year to come and retrieve her mother’s things, but Herman had not let her come get anything, threatening her life if she so much as stepped foot near his apartment building. Rage had darkened his face, spittle leaving his mouth as he railed and blamed Asa for Deena leaving. She’d finally got through to her mother, had finally convinced Deena to leave the bastard and Herman hadn’t taken it well. Unknown to her, he’d spent the last year looking for her mother. Until he’d finally found her…and killed her. Despite Asa’s best efforts, a tear escaped.

She knelt at the door of the closet and reached back around some boxes Herman kept to disguise what he’d taken for ransom from her mother. Her hand gripped another cardboard box and she pulled it from the dark. She couldn’t say how she knew where it was, or why this particular box was it, but as always, her instincts led to treasure. Some more valuable than others.

This more valuable than anything.

More tears collected, and spilled over as she traced the picture of her as a small girl, wrapped in her mother’s arms taped down to the top of the box. She didn’t dare open it and let the memories out. There would be time for that later. A more appropriate place to grieve. She hugged the small box close and stood, giving a cursory glance around to the place that looked like it had never seen the other side of a cleaning product. She didn’t feel sorry for Herman and what he’d become without her mother at his beck and call. She hoped he was currently rotting in hell.

Asa left the apartment, and flipped a bird to the landlord on the way to the small compact she’d bought for her mother to get around. Deena hadn’t wanted to take it, claimed she could catch the bus everywhere she needed to go. Asa sighed. Deena was so stubborn. And secretive. She’d found that out once she started handling the details of her mother’s estate. Deena had been well cared for. And it wasn’t just the money Asa sent back monthly to her. There had been money from an unknown benefactor. She’d not known that until a few days ago when she’d met with the bank manager.

It blew her mind. She thought her mother poor. Assumed Deena had struggled mightily to send her through college. What other reason had they lived in the shit-hole with that crazy bastard for so long if not for that? Deena had had money, but she’d let that asshole steal it and use it to drink and be lazy on the couch. She’d always found her mother confusing, even more so in her death. She’d found a note from Herman telling Deena that she could finally come get her stuff. It had been what lured Deena out of hiding and had allowed that monster access. She glanced over at the unassuming box and drummed her fingers on the steering wheel.

What the hell was so important that her mother would meet with Herman?

She looked up as a horn behind her blew. She raised a hand, waved and took off. She peered into the side mirror as the hairs on the back of her neck stood up. It was a sixth sense she’d honed in her job. Treasure hunting—what was labeled ‘asset retrieval’ on her taxes— was not for the faint of heart. There was always someone out to get what she’d uncovered, not to mention clients that may or may not have been on the right side of the law. She had her own set of enemies. She took a bunch of nonsense turns to flush out the person following her. On her fourth right turn she spotted a car following her. There were two people in the car. For some reason, though alarmed, she wasn’t overly worried. She sped and turned some corners and lost them. She pulled onto her mother’s street.

The car that had been following her was parked near Deena’s house. A man waved from the driver’s seat and she narrowed her eyes. Who the hell were they and what did they want with her? She parked in the driveway and got out of the car, looking back at them. When they didn’t move, she entered the house and hit the dead bolt. She went to the living room window and peered out to the street. The man was standing across the street, leaned against his car. He was tall and bulky, his all black clothes and menacing demeanor, giving her security vibes. Who did he work for, then? He waved at her again. He held up a small note and pointed to her front porch. She closed the curtain and debated what to do. A few moments later, his heavy footfalls sounded on the front porch and she tensed. His steps retreated and the house went silent.

Was it a potential client? It wasn’t the first time someone had hunted her down, probably wouldn’t be the last. She was good at her job, and word of mouth moved swiftly in the small circle she inhabited. She went on with fixing dinner, until curiosity finally got to her. She peeked out the window and the man’s car was gone. She looked out the peephole. Not seeing anything, she grabbed the bat by the front door and opened it. There was a note taped to the front door. She snatched it, looked around and closed the door. She put down the bat and unfolded the note. All it had was an address and the words:

Below that, the name: Fallon Tegan and a phone number; that was it. She folded the note and tapped it against her chin. So a job then. She sighed and set the note on the table by the door. She didn’t know that she was ready to start back with work. She needed to pack up her mother’s things and figure out what she wanted to do with the house. Asa looked around at the half furnished house, still littered with unopened and unpacked boxes. Deena had been in the house a year, and nothing was put into place. Had her mother known how little time she’d had? She looked at the note again. She could put off dealing with her mother’s things, taking another job would push it off for a few more months. Maybe that was the best thing to do. 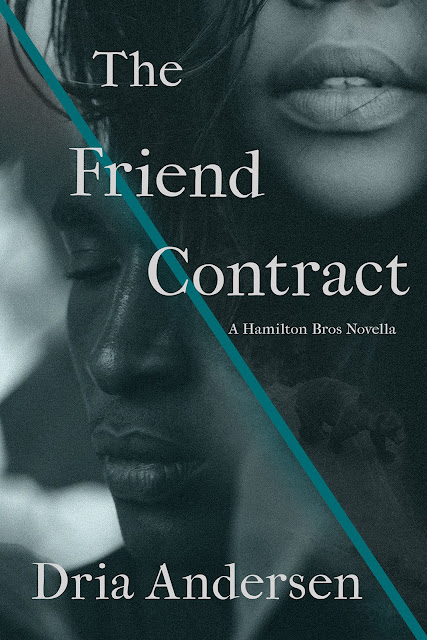 The Friend Contract is coming soon! 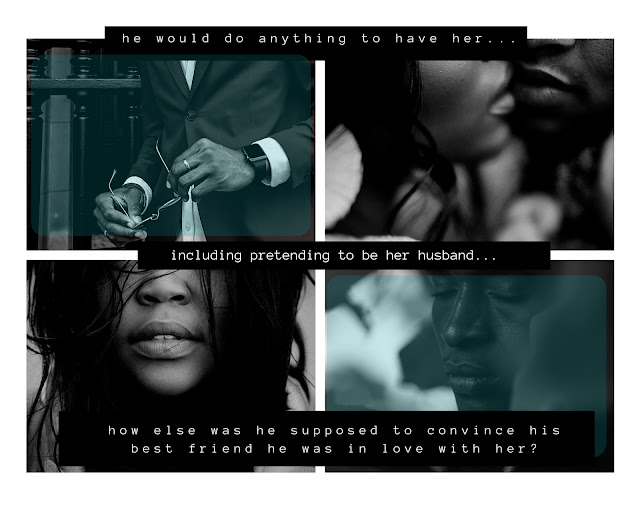